Dogs & cats have always been a part of my life as far back as I can remember. When I was a little girl I pulled my cats tail, my mother reached over and yanked hard on my pony tail. Then and there I learned empathy and loved that cat even more. His name was Garfield, no, I didn’t pick it.

The first one I want to really share about though is Sam. I’ll randomly post highlights on each member of our menagerie, however I have to make sure Sam E. Dog goes first. He was my first canine and he died two and a half years ago after many adventures together. Never was there a more wonderful dog. I’m sorry, yes it is true. Even my other dogs agree and dogs do not lie. Ever.

Sammy was half lab and half spaniel. A more amusing, loving, handsome mix as there ever was.

At three months old he became my best friend. Forgiving, gentle, understanding, playful, loyal and a very comfortable pillow. He was all of that and more.

When I was 16 a friend of my mother’s took Sammy and I hiking and her boyfriend got us lost. This of course, he did not admit until about 6 hours into the three hour hike. We were in a valley in Hawai’i that he had swore he knew up and down. Apparently he only knew up as we ended up on top of a ridge. When the sun set and the rain came down he finally gave into his girlfriend pleading to call and see if someone could find us.

One ride in a black hawk helicopter later we made a minor blurb in the newspaper. Watching Sammy get airlifted up into the chopper was awesome, he however simply took the moment to settle under the seat and take a nap. What a vivid memory.

Through all the places we lived and explored, Sammy was always a constant. He kept me grounded and reminded me that love was many things. Anyone who claimed animals do not understand that concept were missing a piece of joy in their lives. 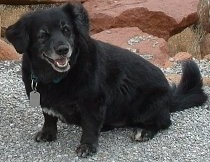 He saved my life once, rode in a black hawk with me, had coyote girl friends visit, followed along on any trail ride he could, loved everyone and protected every child.

This dog was the word gentle defined.
July 94 ~ July 2008       14 years of blessings
We had to put him to rest after his heart grew to big for his body. I always said he had the biggest heart, the vet simply confirmed it.